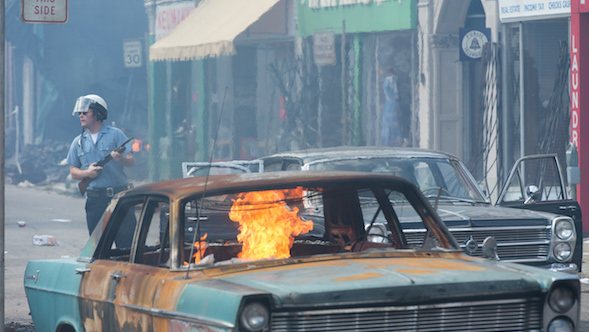 With Detroit, Kathryn Bigelow has made another of the kind of heart-pounding, intensely realistic films that have made her one of the leading directors working today. The film, which is already receiving enormous critical praise, tells the true story of the civil unrest and police action that tore Detroit apart in 1967. As with Bigelow’s The Hurt Locker and Zero Dark Thirty, the powerful, lifelike depiction of life-and-death events seem to unfold in real time and are presented in a way that feels like nothing was staged or prepared; the camera just happened to be at the right place at the right time.

Stephen Nakamura, who did the color grade on Detroit (as well as The Hurt Locker and Zero Dark Thirty), is aware that this feeling in the viewer belies the significant amount of thought and creativity that goes into her films. Nakamura explained that Cinematographer Barry Ackroyd (The Big Short, Captain Phillips) took great care to light scenes of Detroit, most of which takes place within one hotel at night, without making them look lit – hiding small units in strategic areas throughout the set so the audience can follow what’s happening and catch the facial expression or body language that’s key to the scene without ever making things look theatrical.

“There are some people who think that if you’re shooting a narrative film and want it to look ‘unlit,’ that you just don’t light and it’ll come out fine,” Nakamura explains. “But it doesn’t usually work that way. It actually takes a great deal of talent and preparation and thorough understanding of the scene to set lights in a way that looks unlit without distracting the audience and frustrating people because they can’t see key story points.”

Nakamura elaborates that his work in the grading theater with Ackroyd and Bigelow on the naturalistic drama is actually more exacting than some of the wildly colorful grading he’s done on  fantasy type films, set in imaginary worlds. In fine-tuning the shots, he explains, “We have to make everything look completely real. Katrhyn Bigelow doesn’t want anything to look massaged or worked on. It has to look completely real. That’s part of what gives her films such power. But in post we do a lot of work fine tuning the look along the exact same lines as what Barry Ackroyd did with lighting on the day. We bring a portion of the frame out of the shadows a bit or slightly darken another area to help direct the viewer’s eye where it needs to be to follow the story without leaving any part of the frame feeling manipulated.”

Detroit was a special assignment for Nakamura beyond the artistic and technical work he was able to contribute. The powerful drama and the true story it relates deeply affected him. He recounts first sitting down to run through the film the first time just to get an overall idea of what he would be working with. “I usually watch the movie and think, ‘I could do this here,’ I could make that correction there.’ But when I first watched this movie, I pretty much forgot all that and I just wanted to know what was going to happen next!”